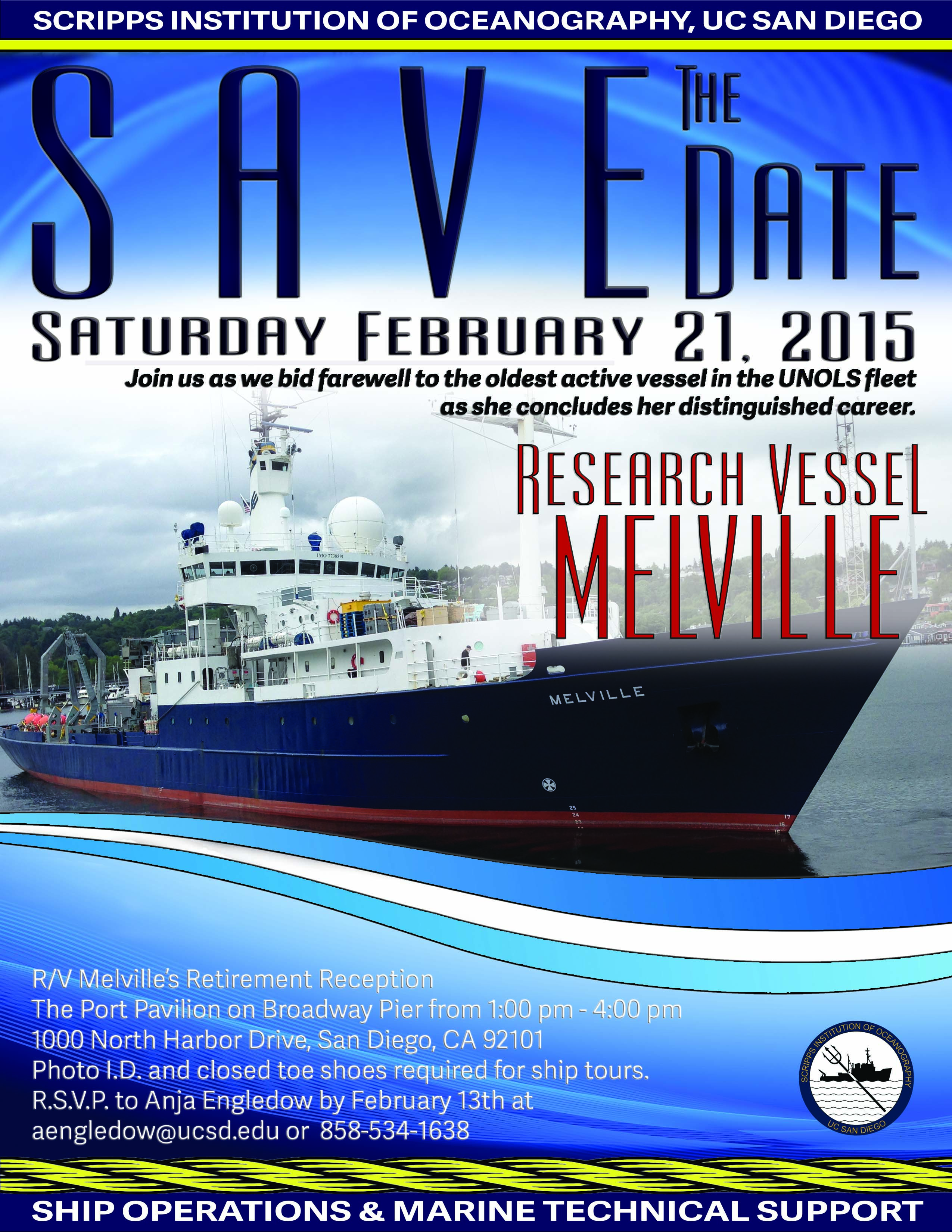 Scripps Institution of Oceanography will host a farewell for the venerable Research Vessel Melville, in celebration of the vessel's 45 years of faithful service to the U.S. oceanographic community, on Saturday February 21st at the Broadway Pier in San Diego Bay.

R/V Melville was built in 1969 with funding by the U.S. Navy, and subsequently owned by the Office of Naval Research and operated by Scripps as part of the University-National Oceanographic Laboratory System (UNOLS).  Configured as a general-purpose oceanographic research vessel, Melville supported a wide range of scientific activities across every discipline of oceanography, and involving capabilites as diverse as deep-towing cameras, deploying massive moorings, precisely maneuvering remotely-operated vehicles thousands of meters below the ship, and launching (and recovering!) unmanned aircraft used to measure gravity and atmospheric physical properties.

A Global Class vessel, Melville excelled at projecting our observational capabilities to the far corners of the planet, operating for extended periods of time far from port through all kinds of weather, with a full complement of  state-of-the-art sensing systems and instruments aboard.  Melville sailed more than 1.5 million miles from the Arctic Circle to the Southern Ocean, crossed the equator more than 90 times, mapped the deepest spot on the planet, recovered core and dredge samples from trenches greater than 8,000 meters deep, and made first-ever observations of deep ocean volcanic eruptions.  Much of what we know today about plate tectonics, marine biodiversity, ocean circulation, waves, climate and the multitude of ways the ocean impacts human society, has benefited from research conducted aboard Melville.

Melville served much longer than the design expectation of a 30-year life, having undergone a service life extension in 1992 that extended the useful life of this ship to 45 years, and resulted in a more capable and efficient vessel.  In 2014 Melville reached the end of this extended period, and was retired from UNOLS service in September.

After such long and distinguished service, Melville deserves a fitting send-off.  On Saturday, more than 600 scientists, mariners, marine technicians, staff, friends and family will come together one last time to tour the vessel.  There will be music, food and countless stories of incredible adventures as we  celebrate the wealth of understanding that Melville made possible.

Public tours of the vessel will be held from 0900 until noon.  An invitation-only reception follows, from 1300 until 1600